After Hiroshima, Abe and Obama to pay respects at Pearl Harbor 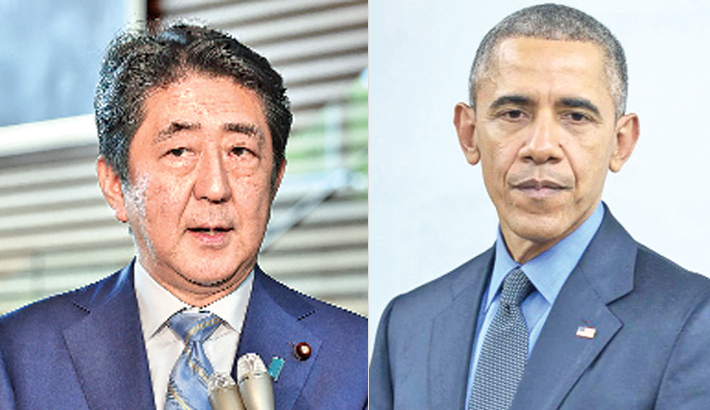 HONOLULU: Seven months after President Barack Obama visited Hiroshima, the city where World War II all but ended, his Japanese counterpart is paying his respects at the site where the brutal conflict began, reports AFP.

Prime Minster Shinzo Abe is traveling to Pearl Harbor, where he and Obama hope to underscore the alliance between their two nations -- 75 years after the Japanese surprise attack that brought America into history’s bloodiest war.

The two leaders are meeting Tuesday in Hawaiian state capital Honolulu, on the archipelago’s Oahu island in the middle of the Pacific Ocean.

The visit has particular resonance for Obama, who was born in Hawaii and spent much of his childhood and adolescence here. Abe and Obama will visit the wreck of the USS Arizona, where 1,177 sailors and Marines died. The ship’s rusting remains, still visible, are now a memorial.

On December 7, 1941, “a date which will live in infamy,” as then president Franklin D. Roosevelt said, Japan’s General Isoroku Yamamoto unleashed a devastating attack on Pearl Harbor’s “Battleship Row.”

The assault caught the Americans off guard, and the Japanese sunk or heavily damaged eight US battleships.

The two-hour offensive killed 2,403 Americans in all and injured more than 1,100 others. An explosion in the Arizona’s ammunition stocks sealed that ship’s fate.

Just as when Obama visited Hiroshima, the purpose of Abe’s tour is not to question decisions made three-quarters of a century ago, or to offer an apology, rather to pay homage to the victims and encourage historical reflection.


“It puts a bookend in some ways to this open US-Japan conversation about the past and the war,” said Japan expert Sheila Smith from the Council on Foreign Relations. “It puts us on a very different pedestal on the reconciliation side of things which I think is important for the region to see.”