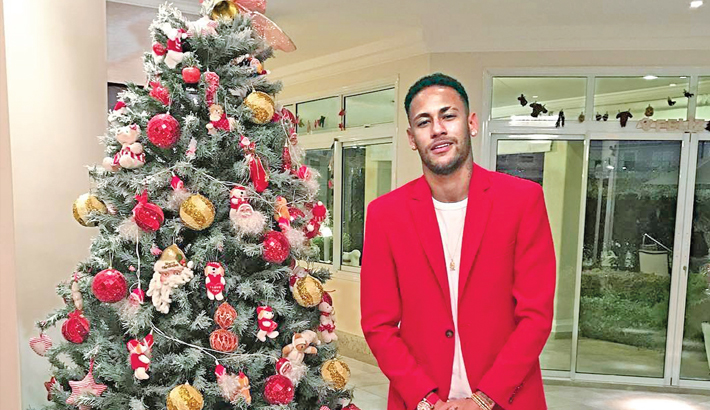 Barcelona forward Neymar captured with a Christmas tree as he celebrates Christmas Day. This photo is taken from Neymar’s Instagram account.

The biggest stars of the greatest game have shared their special festive moments with fans in their own distinctive ways, from sweet family portraits to awkward solo poses in hats alongside brightly lit trees.

Cristiano Ronaldo, the biggest star of them all, chose a waxwork of himself for to accompany his own “Merry Christmas world” message, popping into his museum in Madeira.

Barcelona ace Neymar’s get-up was particularly festive, wearing red shorts, shoes and even a red jacket as he posted a series of shots with loved ones in Instagram.

Toni Kroos chose London to send his seasons greetings from, with the Real Madrid star posting on a traffic island on Regent Street.

Others were a bit more playful, such as Mathieu Flamini dressing up as Santa with former Arsenal pal Cesc Fabregas.

Steven Gerrard is clearly enjoying his new-found freedom since retirement by spending time with his three daughters while Liverpool defender Ragnar Klavan spent Christmas Eve building a gingerbread house with his kids.

Other players took the opportunity to remember those less fortunate at Christmas, with Patrice Evra delivering a very serious message about Syria.

“Instead of wishing you all a merry Christmas I wish you to keep all those suffering in Syria in your hearts and encourage you to make your gift this Christmas to help others,” he said on Instragram.          —Internet