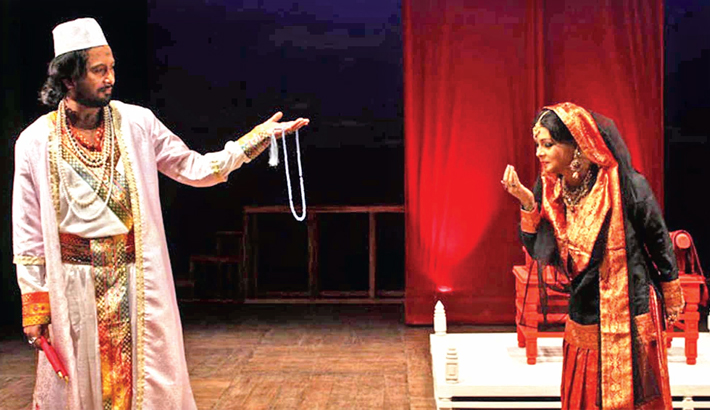 Theatre troupe Prangone Mor will stage its seventh production Aurangzeb, which illustrates a contemporary interpretation of the historical Aurangzeb on stage, at the Rittik Sadan in Kalyani of West Bengal this evening.

At the invitation of the Kalyani Natya Charcha Kendra, the Bangladeshi troupe left Dhaka to participate in the 22nd Kalyani Theatre Festival on Saturday.

The historical matrix of the play, sketching the Mughal palace-politics on stage, provides a base for an exploration of man’s eternal greed for power.

Written by Mohit Chattopadhyaya and directed by Ananta Hira, Aurangzeb selects telescopes and fuses some historic events to capture the fissures as well as the peaks of a period of history. Son of Mughal emperor Shah Jahan, Aurangzeb’s war of succession to throne and ideological conflict with his father who is open-minded to all religions and wants to establish another Taj Mahal-like tomb for his own body at any cost, and Aurangzeb, who dreams of ‘one nation, one language, one religion’articulates and fiercely fights to establish an Islamic fundamentalist state, took the centre of the play.

When Emperor Shah Jahan fell ill in 1657, a war of succession broke out among his four sons, Dara Shikoh, Shuja, Aurangzeb and Murad.