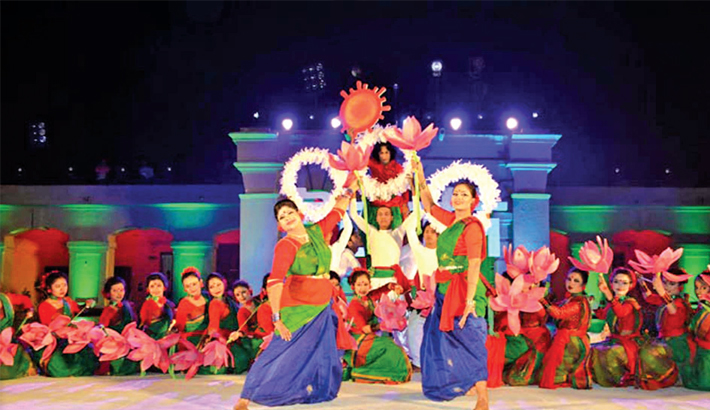 The upcoming episode of Ittyadi, a popular magazine programme by Hanif Sanket, was shot at Kuthibari in Dinajpur on December 18.

Kuthibari, an archeologically and historically significant place, is now used as the sector headquarters of the Border Guard of Bangladesh (BGB).
The audience has participated in the episode by answering the questions on the BGB and Dinjapur district. Four of them would be seen acting in a play.

Putting an end to their long hiatuses, actors Ariful Haq and Masud Ali Khan have appeared in the programme The episode will feature a report on tradition and history of Dinajapur and another report on Noresh Chandra Adhikary of Dhamrai in Dhaka.

Three more reports on Aminul Islam Titas of Gazipur Govt. College, and Jannatul Bokeya Mamuni of Cox's Bazar, and Mohasin Ali of Dinajpur will be seen in the episode.  The toast of the episode is an interview of Marcia Stephens Bloom Bernicat, the U.S. ambassador to Bangladesh, on the Facebook Fan Page of the embassy.

Regular segments of the show include Nana-Naati, a foreign filmstrip dubbed in Bengali, country history, a mail section, an audience round, live music, dance, and plays.

Ittyadi also helps to promote Bengali culture among the young generations in age of cultural diversity due to globalization.  The programme also brings many unsung intellectual persons in music, drama or education into light.


Produced by Fagun Audio Vision and sponsored by Keya Cosmetics Limited, the programme is scheduled to be aired on the BTV and the BTV World after the 08.00pm news on Friday.