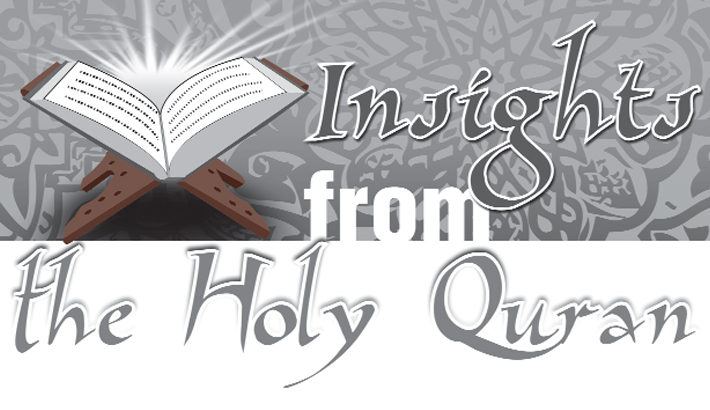 The names of Allah
Most Gracious, Most Merciful

15.    Who receiveth guidance,
Receiveth it for his own
Benefit: who goeth astray
Doth so to his own loss: 1
No bearer of burdens
Can bear the burden 2
Of another : nor would We
Visit with Our Wrath
Until We had sent
An apostle (to give warning).

16.     When We decide to destroy
A population, We (first) send
A definite order to those
Among them who are given
The good things of this life 3
And yet transgress; so that
The word is proved true 4
Against them : then (it is)
We destroy them utterly.

17.     How many generations
Have We destroyed after Noah? 5
And enough is thy Lord
To note and see
The sins of His servants. 6
Tafsir
1. The doctrine of personal responsibility is insisted on, and the basis of ethics is shown to be our own good or evil as furthering or obstructing our highest development.
2. The doctrine of vicarious atonement is condemned.  Salvation for the wicked cannot be attained by the punishment of the innocent. One man cannot bear the burden of another: that would be unjust. Every man must bear his own personal responsibility. Cf. vi 164. But Allah never visits his wrath on anyone until due warning is conveyed to him through an accredited apostle.
3. Allah’s mercy gives every chance to the wicked to repent. When wickedness gets to rampant that punishment becomes inevitable, even then Allah’s mercy and justice act together. Those who are highly gifted from Allah — it may be with wealth or position, or it may be with talents and opportunities — are expected to understand and obey. They are given a definite order and warning. If they still transgress there is no further room for argument. They cannot plead that they were ignorant. The command of the lord is proved against them, and its application is called for beyond doubt. Then it is that their punishment is completed.
4. Qaul here has the sense of word, order, law, charge framed against one under a definite law.
5. Noah’s Flood is taken as a new starting point in history. But even after that hundreds of empires, towns, and generations have perished for their wickedness.
6. Let not the wicked think, because they are given a lease of life and luxury for a time, that their wickedness has escaped notice. Allah notes and sees all things, both open and secret. He knows the hidden motives and thoughts of men, and He has no need of any other evidence. His knowledge and sight are all-sufficient.