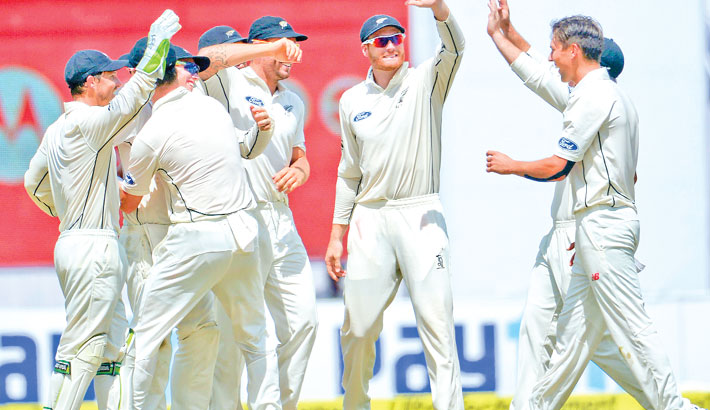 New Zealand seamer Trent Boult, right, celebrates with teammates after taking the wicket of India batsman Virat Kohli during their first day of the second Test at Eden Gardens Cricket Stadium in Kolkata on Friday.

New Zealand bowlers put India on the backfoot despite fighting fifties from Cheteshwar Pujara and Ajinkya Rahane, to leave the hosts on 239 for seven Friday in the second Test.
New Zealand’s recalled pace bowler Matt Henry and off-spinner Jeetan Patel shared five wickets between them on the first day of a must-win match for the visitors in Kolkata.
Wriddhiman Saha was on 14 and Ravindra Jadeja was yet to score when bad light stopped play at Kolkata’s Eden Gardens.
Pujara (87) and Rahane (77) put together 141 runs for the fourth wicket after India, who elected to bat first in their 250th home Test, were in trouble early at 46 for three.
New Zealand need to win the Test to keep their series hopes alive after India secured a comprehensive 197-run victory in Kanpur in the first of the three matches.
Henry claimed the scalps of openers Shikhar Dhawan, who disappointed on his return, scoring just one run, and Murali Vijay.
Trent Boult piled on the pressure to claim the big wicket of Indian skipper Virat Kohli (nine), who was guilty of chasing a wide delivery, as Tom Latham took a splendid catch at gully.
The in-form Pujara, who played a key role in India’s win in Kanpur, then struck his third consecutive half-century of the series.
Coming in at number three, Pujara built his innings patiently and hit 17 boundaries during 219-ball stay at the crease.
Pace bowler Neil Wagner plotted Pujara’s wicket with a consistent line outside the off stump, which finally got the batsman to drive uppishly and be caught at short cover.
Rahane, who hit his ninth Test fifty, tackled the New Zealand bowlers with aplomb, until he was done in by Patel’s wily off spin in the final session.
Ravichandran Ashwin, whose 26-run cameo was laced with 4 boundaries, also tried to counter attack with some aggressive strokeplay, but became Henry’s third victim of the day, trapped lbw.