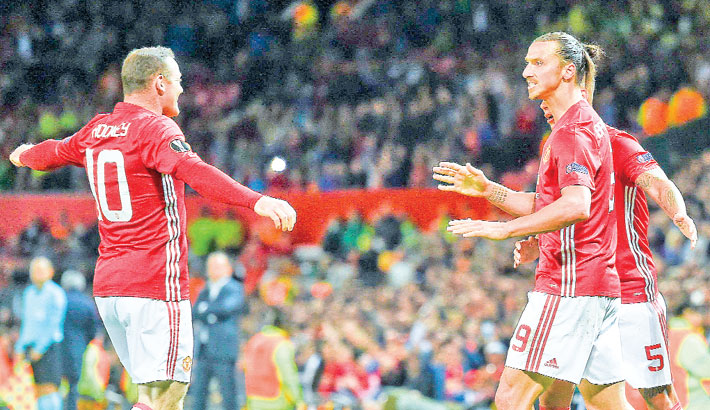 Francesco Totti at 40 continues to shine for Roma, Manchester United needed Zlatan Ibrahimovic’s height to see off stubborn Zorya Luhansk while Mario Balotelli got on the score sheet for Nice again in Europa League action.
Two days after his 40th birthday, captain Francesco Totti set up three of Roma’s goals as they romped past Romanian outfit Astra 4-0. The sublime skills of the midfielder saw first-half free kicks turned into goals as first Kevin Strootman tapped in at the far post on 15, and while Totti’s 45th minute shot was pushed onto the bar by the ‘keeper, Fazio was on hand to head home the rebound. After an own goal, shortly after the restart, a clever lob into the area on 55 minutes from Totti enabled Mohamed Salah to rush in complete a 4-0 victory. Roma now go top of Group E on goal difference after draw 1-1 with Viktoria Plzen two weeks ago.
Zlatan Ibrahimovic headed in a 69th-minute winner as Manchester United got their campaign off the ground with a laboured 1-0 home win over Zorya Luhansk. It was the Swede’s sixth goal in 10 United appearances. Beaten 1-0 at Feyenoord in their Group A opener, Jose Mourinho’s side struggled to break down their Ukrainian opponents until the introduction from the bench of Wayne Rooney. The England captain’s mishit shot was headed in by Ibrahimovic to leave United a point behind group leaders Fenerbahce.
Having awarded a goal to Athletic Bilbao at the end of the first half French referee Tony Chapron consulted his linesman as the Rapid Vienna players protested off-side, which Williams was as he tapped home Aritz Aduriz’ pass. But Chapron’s first change of heart was to award a penalty and a yellow card for a foul on Aduriz. But after further consultation with his assistants Chapron simply disallowed the goal for an off-side early in the build up, leaving the home players holding their heads in disbelief as they went in 0-0 at half-time. Bilbao eventually won 1-0 however thanks to Benat Etxebarria’s thundering drive on the hour. All four sides in Group F now have three points.
While Schalke 04 have suffered five consecutive Bundesliga losses under new coach Markus Weinzierl, the Blues skipped to a 3-1 win over Austrians Salzburg. This season has brought them their worst ever start to a Bundesliga season where they have yet to earn a single point. But with goals from Leon Goretzka, who headed home the opener on 15 minutes, Benedikt Howedes from a corner and an own goal in a scramble, Schalke made it two wins from two in Group I after their 1-0 win at Nice last time out. It was their 14th unbeaten game in the Europa League group phase. For Salzburg, Jonatan Soriano exposed the German team’s defensive frailties with his 72nd-minute consolation.
Two early strikes from Vacvlav Kladec gave Sparta Prague the impetus to eventually overcome ten-man Inter Milan 3-1 at the Generali Arena. Inter may be third in Serie A, but in Europe they are struggling having lost 2-0 at home to Hapoel Be’er Sheva on matchday one. After defender Andrea Ranocchia was sent off, Sparta striker Mario Holek headed home the ensuing free-kick and the Italians looked dead and buried with 15 minutes to go. Coach Frank de Boer will have been furious as Inter captain Rodrigo Palacio had on 71 minutes dragged them back into contention, finishing off a fine move to make it 2-1.
Krasnodar crushed Nice 5-2 in Group I for a second Europa League win for the Russians, who also won 1-0 at Salzburg two weeks ago. For Nice it was a second defeat from two games following a 1-0 home loss to Schalke. But for the Ligue 1 leaders, their romance with Italian striker Mario Balotelli continues to bloom as the 26-year-old got his fifth goal in four games. Trailing after strikes from Fedor Smolov on 22 minutes and Joaozinho, 11 minutes later, Balotelli slipped as he struck a curling shot home in the 43rd minute before bending over to cough and retch having complained of fever overnight. For the in-form Russians, there were braces from the two Brazilians Joaozinho and Ari, who replaced Smolov when he limped off after his opener.