A look back to Bangladesh-England encounters 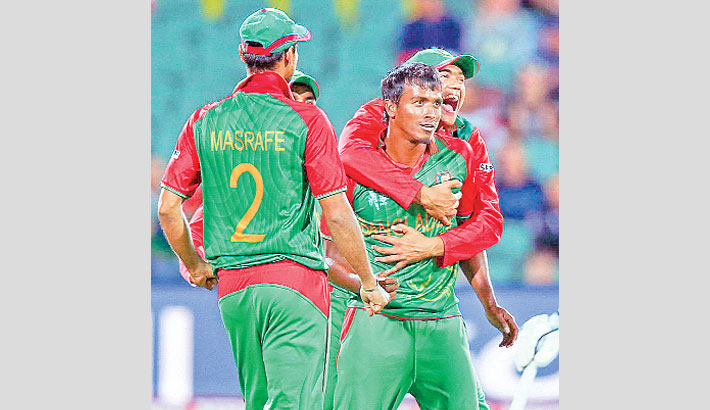 Rubel Hossain got the wickets of Ian Bell and Eoin Morgan in the 49th over.

Despite England’s excellent success rate against Bangladesh, the teams’ most recent encounter at an ICC event, at the ICC Cricket World Cup 2015 in Adelaide, didn’t go well for the Eoin Morgan-led side.

James Anderson got the early breakthroughs, reducing Bangladesh to 8 for 2, but then a third-wicket stand of 86 between Soumya Sarkar (40) and Mahmudullah (103), and an even better fifth-wicket stand of 141 between Mahmudullah and Mushfiqur Rahim (89) lifted the side to 275 for 7.
England, chasing 276 in a must-win game, succumbed to the skilful bowling of Rubel Hossain, and the smart captaincy of Mashrafe Mortaza. It stuck in with brief partnerships, and looked to dominate with a solid stand between Jos Buttler and Chris Woakes. But in the end, Mortaza used Taskin Ahmed to get rid of Buttler just when he was looking dangerous. From then on, Hossain took over to clean the tail up and clinch the thriller.
England would rue that loss, since it halted its progress to the next round of the tournament. 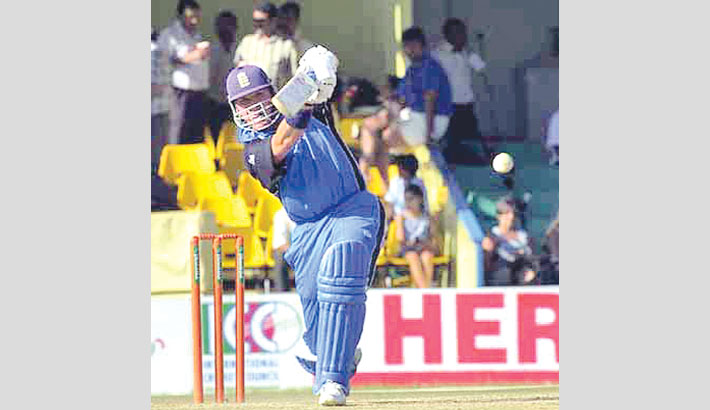 Javed Omar (63) and Naimur Rahman (46) helped Bangladesh to a sizeable total of 232 before England’s Nasser Hussain (91) and Alec Stewart (87*) took the game into their hands and completed a clinical run chase. 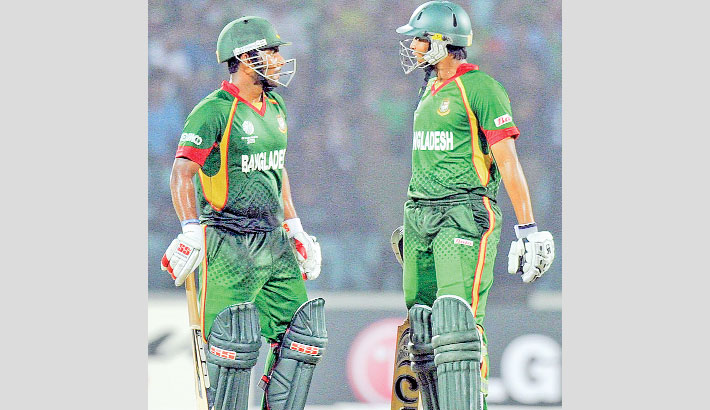 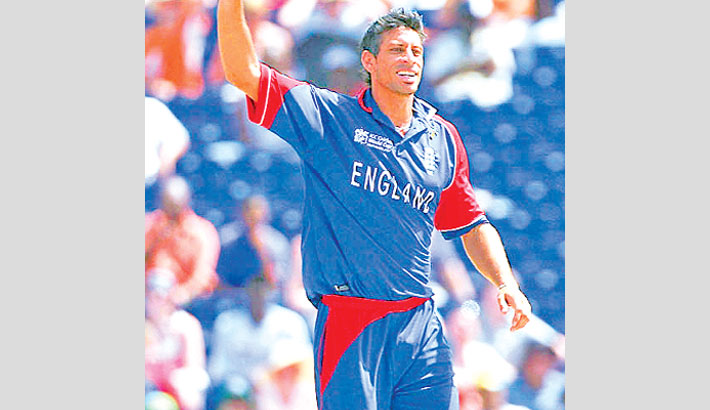 Bangladesh has beaten England in the teams’ last two 50-over encounters in the ICC World Cup: in Chittagong in 2011 with a thrilling two-wicket win and in 2015 when it knocked England out in Adelaide.

England has never won the ICC Champions Trophy or ICC Cricket World Cup but it has reached two finals, in 2004 and 2013.
England’s third highest ODI Total of 391 came against Bangladesh in Nottingham in 2005.

England’s tour of Bangladesh, with its attendant security concerns resulting in the absence of the ODIs side’s captain and first-choice opener, is one that requires handling sensitively. In Jos Buttler, who has accepted the captaincy on a locum basis, they seem to have as sensitive and thoughtful a leader as there is among the young group.

Buttler has already insisted that, as far as he is concerned, Eoin Morgan remains the captain of the one-day side and will return to the job when England go to India in the New Year. “I fully expect it’s a short-term thing,” he reiterated before the team’s departure for Dhaka, having been in touch with Morgan over the phone to discuss the challenge ahead. Alastair Cook, the Test captain who will be joining the ODI squad as part of his preparations for the tour, has also texted his encouragement and will be on hand for advice.

The next few weeks will ask a lot of Buttler. Some were surprised when he was named Morgan’s deputy ahead of the 2015 World Cup and he still does not have much in the way of captaincy experience beyond leading England in a T20 against Pakistan in Dubai last November. With his soft-spoken demeanour, he is not what some people expect of a classic on-field general but he is determined to do the job his way.
“I’ll try and be genuine, I’ll try and be myself, I’m not going to be anyone I’m not as a captain,” he said. “I think I view the game in a very similar way to Eoin Morgan, I’ll try and be aggressive. The way we have been playing the last 18 months, I’ll ask the guys to play in exactly the same way - obviously conditions will dictate that to an extent as well. It’s a young squad but it’s an experienced squad in terms of cricket and game awareness, and that’s something we’re going to need in Bangladesh.”

As well as the increased level of security for the players to deal with - “for the first few days it will be in your mind” - England will face an opponent eager to give them a cricketing headache. Although they lost to Afghanistan this week, Bangladesh have won their last five ODI series at home, stretching back to 2014; the last non-Asian team to come away from the country with a one-day trophy was Australia more than five years ago.
Bangladesh have also beaten in England in three of their last four ODIs, which included handing Morgan’s side their passports during the group stage of the 2015 World Cup. That defeat served as a catalyst for England’s radical limited-overs reinvention and the rematch will provide another opportunity to show how far they have come.

“It was a really tough day in Adelaide, very disappointing,” Buttler said. “But we got to rock bottom there and have come back, turned that corner. It’s going to be a great tour, they’ve been very successful at home in their recent past, so it’s a great challenge for us as a group to play in those conditions.”

England’s arrival is likely to be a major event in Bangladesh, which last hosted a tour by another Full Member in July 2015. Australia pulled out of a planned trip last year on government advice and England’s tour was only confirmed as going ahead last month - with Morgan and Alex Hales opting to make themselves unavailable. Buttler has been to Bangladesh on three previous occasions, most recently for the 2014 World T20, and was confident that it would be a good experience for the players involved.

“We are aware of that,” he said when asked about the significance of England’s visit. “It’s not massively at the forefront of your mind when you make a decision that is right for you, based on security … However, we want to broaden our horizons and it’s fantastic for Bangladesh that we are going to tour. When we get there, cricket will be that universal language and we’ll be welcomed, and it will be fantastic for Bangladesh.
“It’s going to be a good tour. It’s nice that the security stuff can take a back seat and we can start talking about cricket. They’re very passionate fans and it will make for a good atmosphere to play cricket in and we’ll have to play well to win.”

Talk should quickly turn to cricket, as England play a single warm-up match ahead of the first ODI next Friday. With Hales and Morgan missing out and Joe Root rested, England will field a much-changed batting line-up, likely to include the debutant Ben Duckett and two from Jonny Bairstow, James Vince and Sam Billings. They have played just 26 ODIs between them, although it is a mark of how quickly England have grown since the World Cup that Buttler could refer to Billings, who made his debut in the subsequent series against New Zealand, as someone who “has been around for a long time”.

England were flying out the morning after the Professional Cricketers’ Association awards dinner - the schedule barely allows room for end-of-season revelry these days - and the inclusion of Duckett, the first man to win both Player and Young Player of the Year, gives Buttler a weapon that none of his predecessors have been able to draw on.

“He’s obviously had a great year, last night he picked up both PCA awards and rightly so he’s being talked about. He’s a fantastic talent, someone I’m actually really looking forward to getting to know better and to see in training, because that’s really when you start to see how good guys are. It’s very exciting, some of the performances he’s put in - that double-hundred for the Lions was fantastic, so it’s a great opportunity for him. He is a very exciting prospect for English cricket which just shows in one-day cricket there’s some great depth and great competition.”

Bangladesh authorities are promising England’s cricketers unprecedented security when they begin a controversial tour Friday, desperate to prevent the country from becoming a no-go zone for international sport.

After their own security expert carried out an assessment in Bangladesh, England’s cricket board decided to go ahead with a month-long tour that begins with three ODIs followed by two Test matches. But while Alistair Cook will captain the Test team as normal, ODI skipper Eoin Morgan has decided not to travel on security grounds, handing over responsibility to Jos Buttler.

And even the Barmy Army, the diehard supporters’ group which normally follows the team around the world, has held back from endorsing the trip, saying there is “too much risk attached to travelling to Bangladesh”.

In an interview with AFP, the Bangladeshi board’s chief executive Nizamuddin Chowdhury said that “unprecedented security” measures have been promised by the law enforcement agencies during the England tour.

“We will take steps not only for the teams but we have also been given assurances by the police department that they will take special care for the supporters and the foreign media as well.” 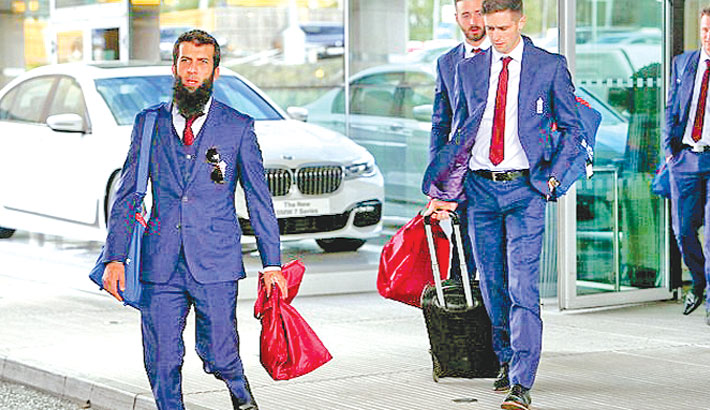 Australia pulled out of a planned tour a year ago after their cricket board’s chief executive James Sutherland said there was a “risk of terrorism in Bangladesh targeting Australian nationals”.

And Australia’s football team was only persuaded to travel to Dhaka for a World Cup qualifier last November after authorities drew up an extensive security plan, aware that a no-show would see them forfeit the match.

Bangladesh is desperate to avoid the fate of Pakistan who — apart from a lone series against Zimbabwe — have not hosted any international cricket since gunmen attacked the Sri Lankan team bus during a 2009 Test in Lahore.

The England team’s management has staked its reputation by seeking to persuade the players to travel to Bangladesh, with former skipper Andrew Strauss, who is now a board director, telling them “it’s safe to go”.

But as well as Morgan, opening batsman Alex Hales has also decided to stay away despite Strauss’s warning that they are giving teammates the chance to impress in their absence and keep them out of the team for good. The Barmy Army meanwhile said that although they had been supplied with a list of hotels which would receive police protection as well as promises of security inside the stadium, there were no such assurances for their travel to and from the grounds.

“We have been supplied with the contact details of a private security company, the implication being that any extra security will have to be at supporter’s own expense,” said a statement on the fans’ website.

“It is a matter of great regret that we feel unable to endorse travel to Bangladesh,” it added.
The Bangladeshi government insists that July’s attack on the cafe was carried out by local extremists despite the gunmen posting images of themselves carrying flags of the Islamic State group.

Critics of the government say it is in denial about the nature of the threat posed by Islamists and an attack during the England tour would further undermine Bangladesh’s reputation as a secure environment.

If anything were to happen, there is little doubt that England and other teams would be in no rush to return to what is a cricket-mad nation while football’s world governing body FIFA would struggle to persuade other teams from fulfilling their fixture obligations. Shahab Enam Khan, a security expert who teaches at Bangladesh’s Jahangirnagar University, acknowledged the stakes were high.

“Bangladesh would consider English cricket team’s visit as one of the highest security priorities and certainly will be committed to ensure every possible security measures,” he told AFP.

“Failing to do so, as we understand, will jeopardise Bangladesh’s reputation in the global arena which will result in incurring lack of confidence on Bangladesh among the foreign countries.”