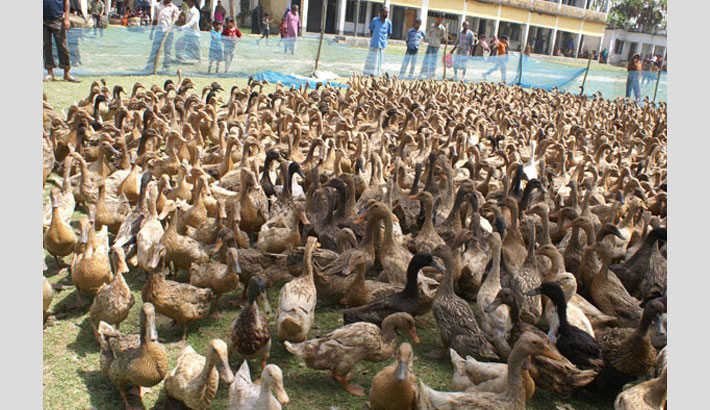 Duck rearing and poultry farming have brought smile on the face of the poor rural women as they are becoming self-reliant with significant rise in their monthly earning, reports BSS.
Although most of the small scale women farmers in the rural areas complaint that they have no adequate loan facilities from the government while the microcredit run by different non-government organisations (NGOs) is not so easy to refund and it  subsequently creates a burden on the clients due to its higher rate of interest.
“I am earning at least Taka 17,000 in a month through rearing 100 ducks and 80-90 poultry birds,” said Jahanara Begum, a small poultry farmer of village Junia of Telekhali union under Bhandaria upazila of Pirojpur district.
But, I fear it will be difficult for me to fulfil the terms of receiving financial loan from the NGOs as those NGOs are taking around Taka 43,000 against the total loan outlay of Taka 30,000 for a year, she said.
Jahanara, wife of Babul Pallan, a day labourer, told BSS that his family has no land except a tin-shed house and pond on four khata of land. Fish cultivation in their pond is one of the main sources of their livelihood, she said.
If the loan facility is available for the small scale farmers with a less interest rate then it could be beneficial for us, said another 40-year-old woman farmer Nasima of the same village who has applied for loan from a commercial bank but she has yet to get loan for the purpose.
“I earned only Taka 3,000 in a month seven years ago when I worked as a health worker in BRAC.....now I am earning Taka 15,000-20,000 through poultry farming and duck rearing,” said Nasima who has 100 poultry birds and 50-60 ducks.
Even there is no support from the government regarding the treatment and vaccination of the poultry birds and that’s why mortality rate of the poultry birds is high in the remote rural areas, she added.
Besides, the price of poultry medicine is also high as we have to spend at least Taka 3,000-4,000 in a month for medicine and food cost for the poultry birds, said the women farmer.
“We are suffering from lack of adequate manpower and so we could not provide proper service to the rural farmers as we have only three field workers for the whole upazila,” said Upazila Livestock Officer (ULO) Dr Prokash Chandra Biswas of Bhandaria, Pirojpur. Noted agricultural economist and former Director General of Bangladesh Livestock Research Institute (BLRI) Dr Jahangir Alam suggested that the public and the commercial banks should be ‘client friendly’ so the small poultry farmers in the rural areas get loan at lower interest rates.
He, however, said that as the poultry production is risky and their profit margin is low, the rate of interest against their bank loan should not be more than 5 to 6 per cent.