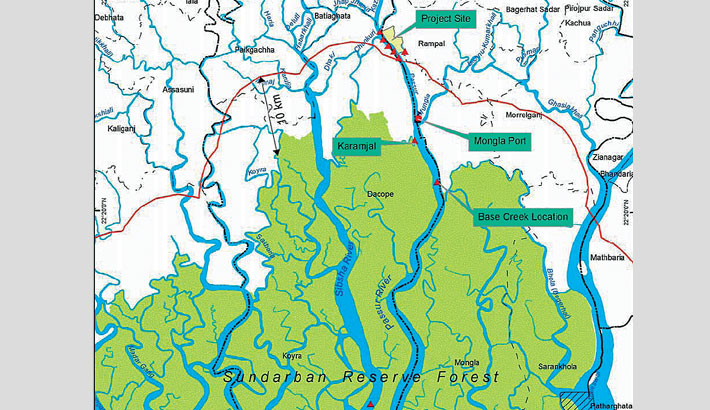 Made up of a unique combination of aquatic and terrestrial niches for varying life forms, the largest patch of reserve forest in Bangladesh, having troubled with the reduced flow from the Ganges, especially in the winter; sea level rise of Bay of Bengal as well as global warming due to climate change, is suffering equally from anthropogenic disturbances; illegal hunting and felling as a result of lax surveillance by the public authorities.
An ecologically critical area (ECA) is a category of protected area designated for threatened ecosystems. In 1999, the Government of Bangladesh declared Sundarbans and its surrounding 10 km radius areas ecologically critical areas. But since then we have been witnessing only devastation to it, sometimes by natural disaster like Cyclone Sidr and sometimes anthropogenic disturbances. However, in recent time, anthropogenic disruption has broken all previous records. Meanwhile, a power plant is under way by the government at Rampal upazila of Bagerhat district, very close to Sundarbans (only four kilometer away Sundarbans ECA) albeit huge oppositions from the environmental activists and concerned citizens.
Coal powered plants, a red category large project with huge environmental impacts, is thought to be extremely hazardous for environment. There is a rumor that such a project was not given permission in India based on environmental ground.
We have experienced, so far, four capsizes of water vessel carrying coal (two times, once October 2015 and another in March this year), furnace oil (December, 2014), and fertilizer (May, 2015). And another hazard is fire. A Fire took place near Nangli forest camp under Dhansagar station of Chadpai range of Sundarbans west sanctuary on 27 March 2016. At least seven fire accidents occurred in Sundarbans. The last cargo vessel carrying 1,235 tonnes of coal sank in the Shela River on 19 March 2016. The coal was meant for burning bricks. Another cargo vessel carrying 510 tonnes of coal capsized in the Passur River near the Sundarbans in the district’s Mongla upazila on 27 October 2015. On 5 May 2015, 300 tonnes of chemical fertilizer (Muriate of Potash) spilled into Sundarbans Bhola River by MV Jabale Nur trawler.  Earlier, an oil spill caused an immeasurable damage to the world’s largest mangrove forest after an oil tanker named Southern Star sank on December 9, 2014 in the same river.
Table: 1 Conservation Efforts of Sundarbans

The first accident happened in December 2014, when an oil tanker capsized in Shela River. It was supposed to ban all types of commercial plying through the Sundarbans Rivers then. But shockingly we see that on 21 March 2016, government banned only the shela river route.
The matter of regret is that the first accident when occurred in December 2014, it drew huge attention from the experts and environmental activists as well as general people. But with time, our sensitivity has been reduced. We saw very slow, in fact, no initiatives after the wreck of fertilizer carrying vessel saying that fertilizer is not harmful to the aquatic environment. The forest department officials finished their duty by filing case against the cargo ship owner and some other people. If only a small trawler carrying crude oil capsizes, can cause this much harm to Sundarbans, then what will be the consequences of the proposed power plant, a red category industry so close to Sundarbans.
In respect to environmental sustainability, coal is worst kind of fuel having various impurities such as mercury and sulfur in it. Coal requirement of Rampal power plant is 12,920 MT/Day. 819 g sulfur and 490 g nitrogen oxides will generated per second from this huge amount of coal. Huge amount of 100 μg/Nm3 particulate matter would be produced from each unit. 9,150 m3/hr of water intake while discharge of 5,150 m3/hr into the passur river of Sundarbans. However, other disturbances include massive coal transport through the Sundarbans and piling of coal in the Sundarbans. The foreseeable impacts of the proposed power plant are pollution of water, soil and air. The vegetation of Sundarbans would be demurred with heat and suspended particulate matters spewed from the power plant’s two generation units. Transportation of coal through Sundarbans will pose serious disturbance to aquatic ecosystems of the Sundarbans whereas loading-unloading and store of coal inside Sundarbans will harm its terrestrial ecosystems.
After capsize of two coal carrying vessels, we now understand the level of safety maintained there. Carrying huge quantity of coal through waterways of Sundarbans is risky and injurious for the aquatic ecosystems of the reserved zone that UNESCO declared a world heritage site and Bangladesh government previously announced as an ecologically critical zone. Plying would exert huge negative impacts on the aquatic fish, crustaceans, mammals and other organisms. The proponents of the project sometimes say that they will use high-tech water vessel for carrying coal but they seldom bear in mind that the more they use technology, the more the impacts will be on nature, especially for a ‘natural site’ that need to be ‘preserved’ not ‘conserved’. Natural resources like Sundarbans need to be preserved in the pristine condition with its as much ‘original’ condition and ‘intact’ as possible. That’s why all these-carrying coal and storing coal inside Sundarbans are not acceptable by any means.
I do not understand, why government is not taking any initiative to relocate the proposed coal fired power plant elsewhere despite the visible disruption of Sundarbans ecosystems even prior to project implementation- even in the ‘without project scenario’.
On 21 March 2016, Bangladesh Inland Water Transport Authority (BIWTA) under Ministry of Shipping on behalf of Bangladesh government banned all types of commuting by motor driven water vehicles in the Shela River following a cargo vessel sink carrying 1,235 tonnes of coal on 19 March 2016. Despite the ban came from Bangladesh government within four days of the accident, it was a sign of lax response of the government as this ban should had come after the oil spill in 2014. There is an urgent need of banning all sorts of commercial plying through Sundarbans reserve forest.
The attitude is something like that government would ban a route after water vessel capsizes it only. Every single capsize of fuel and fertilizer carrying vessels brings about immense and virtually incorrigible damages to the local aquatic and terrestrial ecosystems of the Sundarbans.
Cyclone Sidr (15 November, 2007) proved how much essential Sundarbans is for Bangladesh for protecting the coastal people against the tidal surge and cyclonic storm during a depression. The coastal green belt of Sundarbans slowed down the wind speed and smothered the raging saline water and thus abated the devastating force of the dangerous cyclone.

The writer is an Environment and Climate Change Specialist. He can be reached at [email protected]