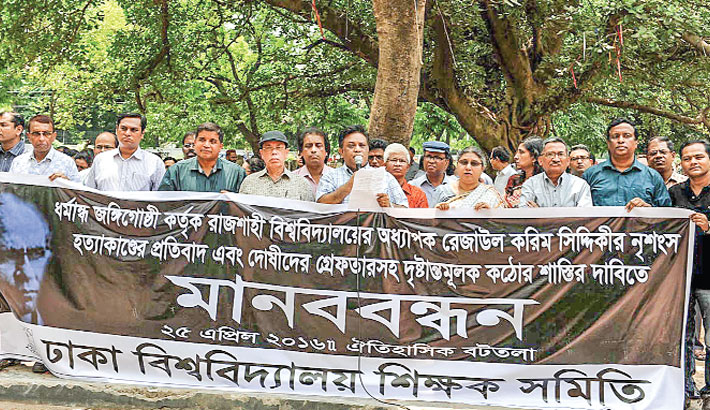 Dhaka University Teachers’ Association forms a human chain at the foot of Aparajeyo Bangla of Dhaka University on Monday, demanding punishment of those responsible for the killing of Prof AFM Rezaul Karim Siddique of Rajshahi University. -SUN photo

Dhaka University Teachers’ Association (DUTA) on Monday demanded arrest and punishment of the killers of Prof AFM Rezaul Karim Siddique of Rajshahi University (RU).
The culture of impunity all over the country leads to an increase in the militant attacks on freethinkers or progressive minded teachers, they said.
They also called for necessary measures to find those behind the grisly murder as early as possible.
They were speaking at a human chain at the foot of Aparajeyo Bangla of DU.
Speaking on the occasion, DUTA President Prof Farid Uddin Ahmed said traditional investigation methods cannot assist in finding the perpetrators behind the murder.
He requested the assistance of the prime minister and the home minister to solve the murder.
In his speech, DUTA General Secretary Prof ASM Maksud Kamal alleged that country is now witnessing killing spree.
“Militant forces can also attack us anytime, as we intend to uphold the ideology of the liberation war and build a non-communal state,” he said.
DUTA leader Prof Maksud called on the government to take stern action against those involved in hatching conspiracies against the country.
Among others, DU Arts Faculty Dean Prof Dr Akhteruzzaman, DU TV and Film Studies Department Chairman AJM Shafiul Alam Bhuiyan, DU Blue Panel Convener Nazma Shahin and DU Economics Department Prof MM Akash were present at the event.
Meanwhile, teachers of Bangladesh Agricultural University (BAU) at a protest programme protested the murder of Rajshahi University (RU) academic and demanded immediate arrest and capital punishment of the murderers.
They said teachers are now beginning to feel insecure, as the killers often go unpunished.
They urged the government to ensure exemplary punishment finding the criminals immediately.
BAUTA President Prof Dr Solaiman Ali Fakir, Secretary Prof Dr Md Abul Hashem and Prof Dr Md Shah E Alam spoke, among others.
Rezaul Karim Siddique, professor of English Department, was stabbed to death by unidentified miscreants near his residence in Rajshahi city on Saturday morning.
Meanwhile, the teachers of Comilla University (CoU) formed a human chain on the campus on Monday seeking justice of the killing of Dr FM Rezaul Karim Siddiqui, professore of English Department of Rajshahi University (RU).
In the human chain, the teachers, in their speech, demanded the exemplary punishment of the killers.
They expressed deep concern over the security of university teachers and urged the government for an objective investigation as early as possible.
Prof Dr Md Ali Ashraf, vice-chancellor of CoU, Prof Dr Muhit Ul Alam,  vice-chancellor of Jatiya Kabi Kazi Nazrul Islam University, Dr Kajol Krishna Banarjee, professor of English Department of Dhaka University, Md Ainul Haque, proctor of CoU, among others, were present in the protest programme.
On April 23, some unidentified criminals hacked the RU teacher to death in Rajshahi city.
UNB adds: Rajshahi University Teachers’ Association (Ruta) on Monday threatened to go on a nonstop strike if the government fails to arrest the killers of Prof Rezaul Karim Siddiquee by seven days.
Ruta leaders came up with the ultimatum while addressing a rally in front of the Senate Bhaban around 11am.
They said they will go on the strike from May 3 if their demand is not met by May 2.
The teachers also decided to put on hold their protest programmes until May 2.
Earlier, Ruta members formed a human chain at Paris Road and brought out a rally to press for the demand.
Addressing the rally, Ruta president Prof Md Shahidullah and its general secretary Prof Shah Azam Santanu demanded immediate arrest of the killers.
Later, they submitted a memorandum to RU Vice Chancellor Prof Mizanuddin in this regard.
Besides, the teachers and students of the RU English Department brought out a silent procession on the campus over the same issue.
Meanwhile, police in a drive early Monday arrested Khairul, an Islami Chhatra Shibir activist, from Lalitahar area of the city on suspicion of his involvement in the killing of the teacher.
With this, two Shibir men have so far been arrested in connection with the incident.