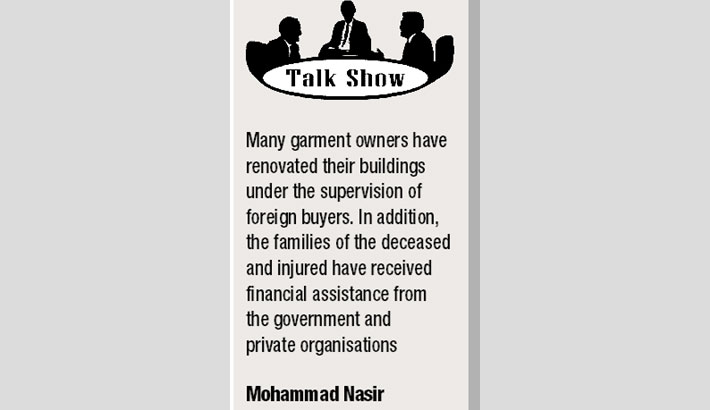 Bangladesh Garment Manufacturers and Exporters’ Association (BGMEA) vice president (finance) Mohammad Nasir said the working environment in the RMG sector has improved much after the Rana Plaza tragedy in Savar.
He said, “Many garment owners have renovated their buildings under the supervision of foreign buyers. In addition, the families of the deceased and injured have received financial assistances from the government and private organisations.
“And we are also committed to their welfare. We are still working for the betterment of the victims of Rana Plaza disaster.”
He made the remarks at a talk show on Channel 24 Sunday night. Trade Union Centre general secretary Dr Wazedul Islam Khan and TIB official Nurul Hasan also took part in the event anchored by journalist Rahul Raha.
Mohammad Nasir said the German government has assisted 515 garment workers who were injured during the Rana Plaza collapse in obtaining employment and they have also been able to bounce back.
“After receiving various training, they are now earning money. Assistance has also been provided by the owners of the garment factories,” he said.
In response to a question, Dr Wazedul Islam said garment workers refused to enter the factory on that day, but the factory owners were more concerned about fulfiling the buyers’ expectations.
At this stage of the programme, TIB official Nurul Hasan said it is true that the garment sector still needs to undergo major changes, but it is also necessary to project the development work done so far.
Of the survivors, a total of 509 people have so far been administered treatment while 390 have undergone technical training, he said.