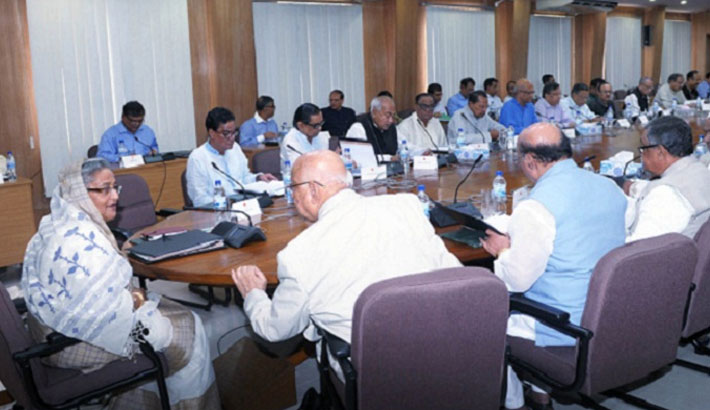 The cabinet on Monday approved, in principle, the draft ‘The Supreme Court Judges (Investigation) Law 2016’ to allow parliament to impeach an apex court judge if found guilty of his or her professional misconduct or incapacity.
The seal of approval was given to the proposed law during the weekly cabinet meeting at the secretariat with Prime Minister Sheikh Hasina in the chair.
After the meeting, Cabinet Secretary Shafiul Alam said the draft keeps a provision to run an enquiry into unprofessional conduct of a higher court judge.
“There is a strict code of conduct for judges. Behaviour that violates the code of conduct will be regarded as misconduct,” he stated.
The draft also has a provision for ‘honourable exit’ of a guilty judge of the apex court, be it Appellate Division or High Court Division of the Supreme Court.
Shafiul said legislative and parliamentary affairs division placed the draft in the cabinet under obligation as per section 96(3) of the constitution following the 16th amendment in September 2014.
“In the amendment, subsections 2, 3 and 4 of section 96 were replaced by subsections 2,3,4,5, 6, 7 and 8,” he said.
As per the amendment, there is a provision to probe an allegation levelled against an SC judge. “The law is drafted under constitutional obligation.”
The secretary said the draft was also aimed at returning to the main law of the 1972 constitution to ensure legislative process regarding removal of any SC judges like all other democratic nations across the world.
A similar law was in the original constitution and it was changed after 1975 incorporating a provision of forming Supreme Judicial Council, he said, adding that such council does not exist now in any country excepting Pakistan.
Under the proposed law, an aggrieved person can submit a written application to the Speaker of the House against an SC judge for their misconduct.
In that case, the Speaker will form a ‘preliminary committee’ with not more than 10 lawmakers to investigate justification of allegation while the committee will submit its prima-facie report to the Speaker within seven days.
Shafiul said, “On valid grounds of allegation, the Speaker will form a three-member independent investigation panel, led by a former chief justice, with an ex-attorney general and a noted citizen or a jurist as its members to probe it.”
Finally, parliament will discuss the report to be submitted by the investigators.
“The recommendations adopted by parliament with a two-thirds majority will be sent to the President for signature to remove a judge at fault,” he said.
On baseless allegation of misconduct against a judge, the person concerned will face two years’ imprisonment or a fine of Tk 5 lakh.
The cabinet secretary said the draft has been prepared after consultations with stakeholders concerned, including Appellate and HC Division judges. “Still, there is scope to input suggestions in the draft.”
After further discussions with the stakeholders concerned, he said, the draft will be placed in the cabinet again for its final approval.
The cabinet on August 18, 2014, approved a proposal to authorise parliament to impeach a judge while the 16th amendment was passed on September 17.
The Law Commission prepared the draft last March, outlining a process for the impeachment of an apex court judge.
During the framing of the 1972 Constitution, parliament had the authority to impeach a judge and also determine their tenure. However, the power to impeach a judge was bestowed on the President through the 4th amendment.
The issue of empowering parliament appeared on the table during the Awami League-led grand alliance’s tenure over a ruling by the then Speaker and incumbent President Abdul Hamid.
Raising the issue in parliament, some senior lawmakers battled for empowering parliament to impeach any judge.
It was also discussed during the 15th amendment to the national charter.
It was learnt that the chief justice refrained from giving any opinion on the draft law as a case is pending with the court in this regard.
NATIONAL HOUSING POLICY
The cabinet also approved the draft ‘The National Housing Policy 2016’ with a view to ensuring housing facility for every citizen of the country.
“The policy was okayed with special importance to housing facility for every citizen, sustainable development of human rehabilitation and consideration of social, environmental and religious values,” the secretary said.
It has also attached a proposal to form a ‘Land Bank’ with khas [fallow] and idle land of the urban and rural areas.