USAID employee, his friend hacked to death in city 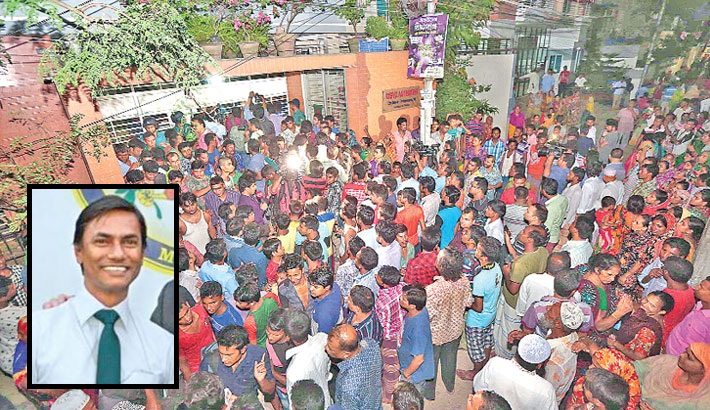 Onlookers gather in front of the house of Xulhaz Mannan (inset), who along with his friend, was hacked to death by unknown assailants inside the house at Kalabagan in the city on Monday evening. -Sun photo

In an alarming deterioration of law and order situation, two people were hacked to death in the city’s Kalabagan area and a prison staff was shot dead at Kashimpur jail gate on Monday.
In the city, USAID employee Xulhaz Mannan, who formerly worked as a US embassy protocol officer, and his friend Tanay were stabbed to death by unknown attackers in his flat.
Xulhaz, a cousin of former foreign minister Dr Dipu Moni, was also an editor of Bangladesh’s first LGBT (Lesbian, Gay, Bisexual, and Transgender) magazine ‘Roopban’.
Parvej Molla, the security guard of the house, was also injured when he tried to stop the assailants from fleeing. He is now undergoing treatment at Dhaka Medical College Hospital.
On the other hand, the man killed at the jail gate is Rustam Ali, a chief prison guard of Kashimpur jail. These grisly killings took place only two days after the brutal murder of Rajshahi University Prof Rezaul Karim.
Police suspect that the militants have a hand in the killings in both Kalabagan and Rajshahi. But nobody could be arrested for the killings on Monday till the writing of this report at night.
US Ambassador Marcia Bernicat in a statement condemned the killings and demanded immediate arrest of the killers.
“I am devastated by the brutal murder of Xulhaz Mannan and another young Bangladeshi this evening in Dhaka,” said Marcia Bernicat in the statement.
“Xulhaz was more than a colleague to those of us fortunate to work with him at the US Embassy. He was a dear friend,” she added.
Md Maruf Hossain Sardar, deputy commissioner of DMP (media), said the incident took place on the first floor of a six-storey building named ‘Ayesha Nibas’ located at Kalabagan in Dhanmondi at around 5:00pm.
Armed assailants in the guise of courier service workers entered the flat and killed the duo. Locals said they heard screaming from the house at about 5:00pm. Later, they saw at least five youths rushing out of the house.
One of the killers had a pistol in his hand and they fled away through the Dolfin Goli.  Quoting locals, Habibur Rahman, Assistant Sub-Inspector of Kalabagan police station, said Xulhaz was staying in that house with his mother and a housemaid. Tonoy was a friend of Xulhaz. On Monday evening, four to five people entered the building saying they are from a courier service and they have brought some parcels for Xulhaz.
As soon as someone opened the door of the flat, the attackers swooped on the duo and stabbed them with sharp weapons and left the flat quickly. Xulhaz’s mother and the domestic help were present at the time of the incident.
The security guard of the building Parvej Molla tried to stop them when they were fleeing from the house. But the assailants attacked him with knives, leaving him injured.
At that time, some locals also chased them but the criminals managed to flee the spot.