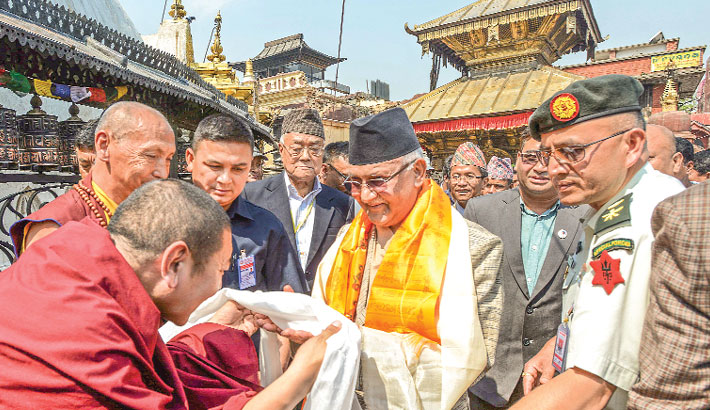 Buddhist monks welcome Nepalese PM KP Sharma Oli at a ceremony to lay a foundation stone to rebuild a temple damaged in an earthquake at Swyambhunath stupa in Kathmandu on Monday, during an event to mark the first anniversary of the quake. Some 9,000 people were killed in the 7.8-magnitude quake that struck April 25, 2015 and its aftershocks. -AFP PHOTO

KATHMANDU: Nepal’s prime minister joined Buddhist monks at a prayer ceremony Monday to mark the start of rebuilding of five ancient monuments destroyed in an earthquake that killed thousands and devastated the country’s rich cultural heritage, reports AFP.
The ceremony at the seventh-century Swayambhunath Temple complex came exactly a year after the quake struck, although the main commemorations for the dead were held Sunday, the anniversary by the Nepali calendar.
One of the Buddhist temples at the spectacular hilltop complex, a UNESCO world heritage site, was completely destroyed by the 7.8-magnitude quake.
Rebuilding work began Monday on that and four other monuments, including a temple in the historic town of Bhaktapur and two wooden pavilions once used for royal ceremonies that crumbled in the quake.
“They are treasures given to us by our ancestors... it is our responsibility to hand them down to the next generation the way they were handed down to us,” said Bhesh Narayan Dahal, director general of the government’s Department of Archaeology.
“We will begin reconstruction of other monuments as well, work has been slow but now it will pick up pace,” Dahal told AFP. About 700 monuments require rebuilding or repair. Many are major tourist draws, including Swayambhunath, known as the “Monkey Temple” because of the animals occupying the steps leading up to it.
While restoration work has begun on a handful of temples, including the fifth-century Changu Narayan complex, officials say it will be years before Nepal’s rich architectural heritage can be fully restored.
The rebuilding of houses has been even slower to start, and on Sunday protesters marched on government offices to demand faster reconstruction efforts.