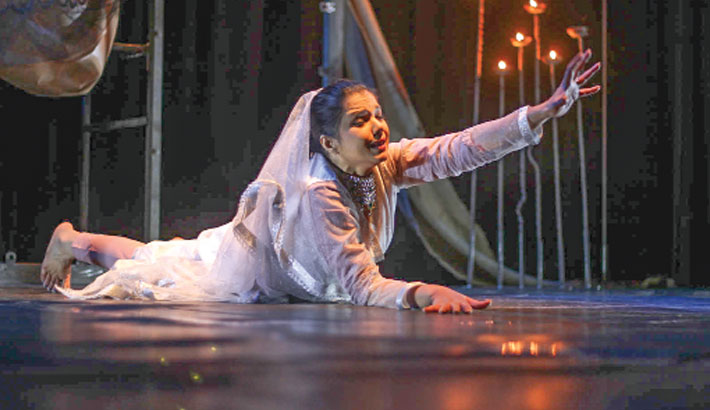 Dhaka Theatre staged its much acclaimed production Panchanari Akhyan at the Experimental Theatre Hall of Bangladesh Shilpakala Academy on Wednesday evening.
Panchanari Akhyan, the 37th production of Dhaka Theatre, is a monodrama in which celebrated actor Rosey Siddique, in a row, plays five different roles come from five different strata of society.
From the dawn of civilisation, women have been struggling hard to establish their gender rights. It is gender-equality for which the women folk’s fight is still prevalent in every class, whether it is affluent or impoverished.
The concept of women issues, in the backdrop of a male-dominated society, often takes the centre stage of current theatrical productions.
Women, being considered inferior to men, having to bend over backwards to accommodate societal requests and needing to kowtow to irrational norms are issues that are still relevant to our society, took the focal point of the play.
Written by Harun Rashid and directed by Shahiduzzaman Selim, Panchanari Akhyan is such a stage play which weaves five different stories of five women in a strong string of acting. The common voice of all the characters in the play is to depict common women-woes on stage.
Jolekha, a beautiful girl, comes to Dhaka with the stardust in her eyes to become an actor. But, fortune frowns on her. Instead of becoming an actor, she finds herself as a prostitute at a brothel and cannot break down the hurdles of her life.
Apparently looked happy, Manarama comes to know that she cannot become mother because of her husband’s sterility; yet she blames herself for that.
A historical character, Mamtajmahal, the wife of Mughal Emperor Shah Jahan, is one of the five characters that Rosey Siddique does in the play.
The ghost of a rural girl and a housewife, abandoned by her husband are other two characters Rosey Siddique enacted with equal energy and skill.
Afzal Hossain aptly designed the set of the play while Wasim Ahmed did the stage lights. Music of the play was done jointly by Shimul Yousuf and Chandan Chowdhury.
About the play, Rosey Siddique said, “Stage is my birth-place as an actor, then come small screen and others. I have been acting on stage since 1989 and got involved with Dhaka Theatre in 1994, But, I am quite serious about the production as it is my first-ever-monodrama. To do a monodrama is definitely a dream-project for any actor. For the monodrama, I have to frequently transform from one character to another.”