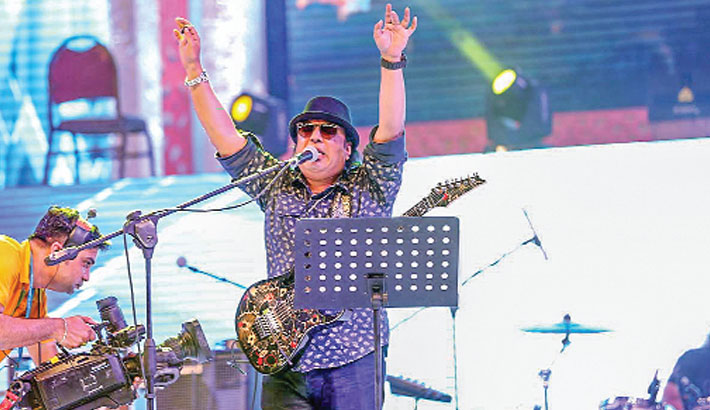 LRB, Feedback and Dalchhut, three popular music bands of the country, delighted audiences by performing on a single stage on Pahela Baishakh.
Arranged by Maasranga Television, the open live concert was held at Abahani Playground at Dhanmondi from 12.00pm to 5.00pm.
Maasranga TV aired the concert live.
LRB (Love Runs Blind) is a Bangladeshi rock band founded in 1991 by guitarist Ayub Bachchu. The group consists of Ayub Bachchu (lead vocal and guitar), Swapan (bass guitar), Masud (guitar) and Romel (drums).
The acronym LRB originally stands for Little River Band, but since another Australian band already had that name, Bachchu has changed it to Love Runs Blind.
Although LRB is a rock group, they owe their musical heritage to a rich Bengali musical tradition. In general, music in Bangladesh has been used as a communication device to relay stories from one generation to the next, and to encourage the population to adopt specific ideals towards how they lead their lives.
Bangla music fits into five genres, many of which reflect the core values of the musical approach taken by LRB.
Feedback is a Bangladeshi band, formed on 4 October 1976.
Their first appearance was in The Hotel Inter-continental (now the Sheraton), Dhaka, on 11 October 1976. Their first recorded song was Ei Din Chiro Din Robey in 1980.
Labu Rahman joined Feedback in 1987 and started playing concerts out of the hotels. They released their first album Feedback and then Sragam Acoustics.
The current line-up of the band includes Labu Rahman - Guitar and Vocal, Shahnur Rahman Lumin – Vocal, Enam Elahi Tonty – Drums, Foad Nasser Babu – Keyboard, and Raihan Al Hasan – Vocal.
Dalchhut is a band from Bangladesh. Bappa Mazumder and Sanjeeb Chowdhury were first met at a local market in Dhaka in 1993.  Bappa and Sanjeeb began to work together when Bappa asked Shanjib to work on his solo album. Sanjeeb wrote a number of songs, including Rani Ghumay, Chokkhu Khule Dekho and Hattimatimtim for Bappa’s inaugural solo album.  They worked together in the Ashok Karmokar photo exhibition Kalratri', which impressed the audiences and encouraged the duo to form a band.
Sanjeeb proposed Bappa to form a musical group. Bappa agreed and Sanjeeb named the Band Dalchhut. As a result, Dalchhut was formed in November 1996.
The initial line up only included Bappa and Sanjeeb. Famous bass guitarist and singer Sumon of band Aurthohin helped them in early stages.