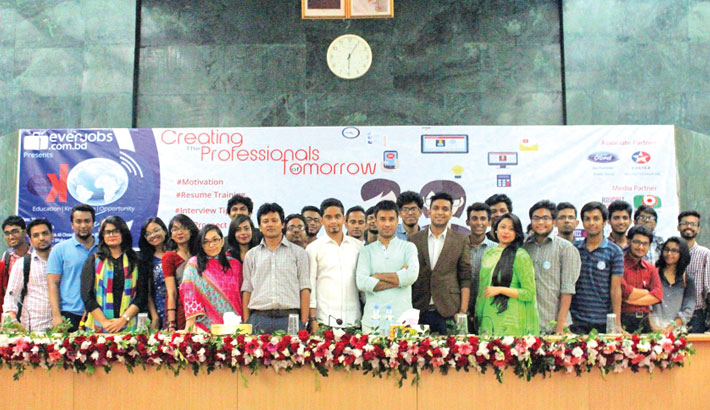 Everjobs Bangladesh, a leading jobs portal operating in nine countries, has launched a campaign named “ekO” that stands for Education, Knowledge and Opportunities. The three very strong pillars that help you excel in your career. Education that is the very first stepping stone of your life that broadens your horizon of knowledge and takes you to the world of opportunities. And that is the very goal of this “ekO” campaign. The campaign aims to provide proper amount of education, knowledge and opportunities that will help the potential job seekers enrich their career development.
“ekO” began its journey on the 7th of April, 2016 at the beautiful auditorium of Nabab Nawab Ali Chowdhury Senate Bhaban at the University of Dhaka at 3.00 PM. Professor Mofizur Rahman, Chairman of Mass Communication and Journalism inaugurated the campaign with a inspiring speech. Followed by him, Sabirul Islam, the Managing Director of Everjobs Bangladesh gave a short speech addressing the student body. 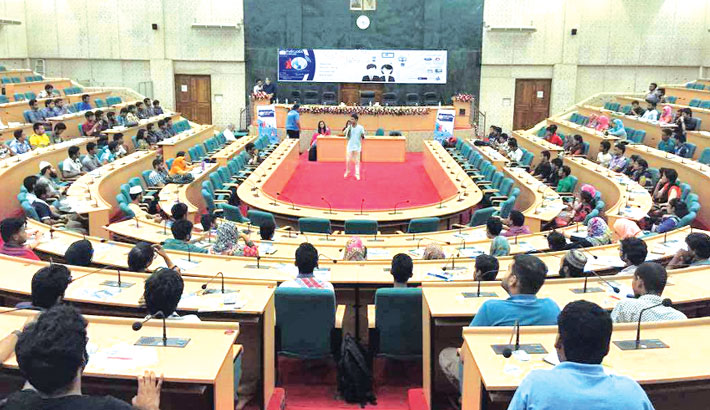 In the welcome speech, Fariel Samiha Sadaf, Content & Communication Associate of Everjobs Bangladesh elucidated what “ekO” was all about and how it was going to help the students get a better perspective of their career path in the near future. She mentioned that the campaign of “ekO” has four dimensions. First one being the “7 Division ekO Tour” that starts its journey from University of Dhaka and will be taking place in some of the iconic universities around Bangladesh including Chittagong University, Khulna University, Shahjalal University of Science and Technology and more. The main focus of this specific tour arranged by EverjobsBangladesh, is to go to students and teach them how to better prepare themselves for the upcoming challenges. This event consisted of invaluable guidelines on CV writing and Interview skills, a heartwarmingly motivational speech from the MD, Sabirul Islam himself and a fun and insightful presentation on future careers in Bangladesh. Another aspect of the campaign is the TV show on Boishakhi channel. This very TV show entails 13 episodes and those 13 episodes would be focusing on 13 emerging industries of Bangladesh like NGO, pharmaceuticals, banks, ad agencies etc. This show would be hosted by Sabirul Islam and every episode would have an industry expert who, so far, has proven the worth and would pass on the wisdom and knowledge s/he has acquired so far. Every show will have a bunch of students from different renowned universities as audience, so that they can pose any question they may have for the guest. There will also be an option of LIVE chat through the website of Everjobs Bangladesh which is www.everjobs.com.bd/ekO. Anyone who might have anything to know about the industry, job prospects etc. can log in to the website and ask their respective questions and the authorities concerned will be answering to all of them. Another two elements of this campaign are the Radio show called “ekO’d Voice” on Radio Next 93.2 FM and the YouTube show named “Alter ekO”. The radio show would be a spin-off on the TV show and would be focusing on the same industrial aspects discussed the previous night on “ekO”. Whereas “Alter ekO” would solely focus on bringing in different professionals from different industries and arenas to share their experience of the fascinating careers they have had so far. This platform would be a great way to build a bridge between the professionals and their successors who would want to know about them personally and follow their footsteps. At the end, Fariel mentioned that the students who would be participating in the “ekO Tour” would be given a certificate via mail. Following the end of her speech, the whole event began.
Ipshitt Tarafdar, Manager, PR & Marketing, conducted the whole session on CV writing and Interview skills with his interactive persona which helped the students quite a lot getting engaged with him. He talked about how do the recruiters choose and what are the aspects that the students should follow in order to prepare a top notch CV. A lot of emphasis was put on one’s interview skills as well, since it is one of the most important things of the application process. The most astonishing part was when students were seen taking notes which only proved that the information provided seemed worth scribbling down notes for. At the end, Ipshitt also explained how the students can create a profile on the website of Everjobs Bangladesh and search and apply for jobs thoroughly.
After this session, Sabirul Islam, steered his motivational speech which left the students awestruck. The whole speech was directed towards facing one’s fears and overcoming them. He went down to their level and made them realise how relevant his experiences were to any other human being who felt shattered at one point in their lives but conquered the obstacles anyway. All things faced by so many individuals when they are on the verge of choosing a career path and following it through.
As Sabirul’s poignant speech came to an end with a huge round of applause, the event rolled on to its next agenda which was based on the future careers of Bangladesh from a digital perspective. Safwan Mahfuz, Digital Marketing Executive of Everjobs Bangladesh, took a session on how potential social media enthusiasts can get paid for what they most love doing. With the massive growth in the ICT sector of Bangladesh and a growing number of e-commerce websites, it’s becoming more and more important to take care of the digital marketing side of a company as part of the whole advertising campaign. Gone are the days of just print and TV advertising as more and more people are glued to their computer screens or smartphones, which has become the prime reason why digital marketing has a growing future in Bangladesh and across the world. According to research there have been an increasing number of companies hiring employees for their digital marketing team over the past couple of years. This is slowly becoming a stable career path to choose, with multiple institutions that also provide extra training about digital marketing tools and activities.
The event concluded with a speech from Ipshitt Tarafdar by thanking all the students for attending the programme and being an astounding crowd.  It is hoped that this “ekO” campaign will help build a solid bridge between the employers and the candidates.