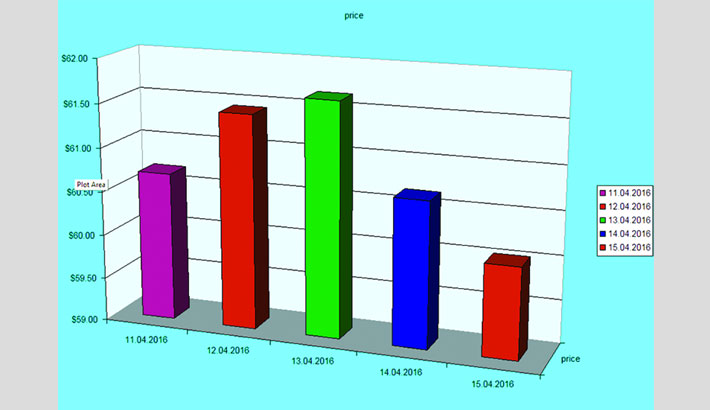 Most benchmark prices were flat or higher over the past month. An exception was the China Cotton (CC) Index, which continued to decline.
Values for the most actively-traded July NY futures contract rose from levels near 57 cents/lb to those near 61 cents/lb. This round of increases lifted NY futures over 60 cents/lb for the first time since mid-February.
The A Index also increased about three cents/lb, with recent values near 68 cents/lb.
In international terms, the China Cotton (CC) Index decreased slightly, falling from 84 to 82 cents/lb. In domestic terms, the CC Index declined from 12,000 RMB/tonne to 11,700 RMB/tonne.
Although levels have increased since early April, Chinese ZCE futures prices continued to signal declines in Chinese cotton prices in coming months. Values for the most actively traded September contract have been near 10,600 RMB/ton (74 cents/lb), which is about 1,100 RMB/ton or about 8 cents/lb below current cash prices represented by the CC Index.
Prices for the Indian Shankar-6 variety were flat to slightly higher in international terms, rising from 63 to 64 cents/lb. In local terms, values also increased slightly, climbing from 32,900 to 33,200 INR/candy.
Pakistani spot prices were stable, holding to values near 61 cents/lb in international terms and those near 5,250 PKR/maund in domestic terms.

This month’s USDA report was the first since September that did not feature declines to both production and consumption estimates. The world production figure was lowered 420,000 bales (from 100.2 to 99.8 million). If realised, this represents the first time since 2003/04 that production would be below 100 million bales. The global mill-use projection was increased 375,000 bales (from 109.2 to 109.6 million).
The reduction to the global harvest figure was a product of lower forecasts for Cote d’Ivoire (-200,000 bales, from 800,000 to 600,000), Mali (-110,000, from 1.1 million to 990,000), and Brazil (-100,000, from 6.7 to 6.6 million). The largest country-level revisions to mill-use figures included those for China (+500,000 bales, from 32.0 to 32.5 million), Pakistan (+500,000, from 9.6 to 10.1 million), Bangladesh (-100,000, from 5.8 to 5.7 million), Turkey (-100,000, from 6.4 to 6.3 million), and Indonesia (-400,000, from 3.2 to 2.8 million).
World trade figures were mostly unchanged at 34.9 million bales. The stability in the global import and export forecasts contrasts with the series of revisions for both imports and exports. The Pakistani estimate was increased 600,000 bales (from 2.3 to 2.9 million) due to the combination of strong demand for textile exports as well as the smaller crop that resulted from adverse growing conditions. The increase in Pakistani imports was mostly offset by reductions to figures for Indonesia (-400,000 bales, from 3.1 to 2.7 million), Bangladesh (-100,000, from 5.7 to 5.8 million), and India (-100,000, from 900,000 to 800,000). Notable revisions to export figures included those for India (+250,000 bales, from 5.5 to 5.8 million), Brazil (+100,000, from 4.2 to 4.3 million), Cote d’Ivoire (-150,000, from 800,000 to 650,000), and Mali (-200,000, from 1.2 to 1.0 million).
Price outlook
Despite indications that another round of sales from the Chinese reserve system will begin sometime later this month, price-related details concerning an upcoming auction have yet to be released. The absence of a price-related announcement has been cited as a potential reason that Chinese ZCE futures moved higher over the past week. In turn, the upward movement in Chinese futures could have lent support to NY futures and the A Index. Strong U.S. export sales data, a weaker dollar, and increases in prices for other commodities may have also contributed to recent gains.
Next month, price direction will be informed by the USDA’s release of its first complete set of estimates for the upcoming 2016/17 crop year. Preliminary USDA figures released in late February, as well as early forecasts from private forecasters, suggest that acreage in China will decrease further but that acreage in other major producing countries should be flat to higher.
At the end of March, the USDA released results from its survey of U.S. producers and their planting expectations. Findings indicated that U.S. growers will plant 11% more cotton than last year. At 9.6 million acres, the amount forecast by the USDA survey is slightly higher than the volumes predicted by the National Cotton Council survey in early February and USDA analysts in late February.
Last year, wet weather prevented cotton from being planted in certain regions of Texas and the Mid-South. This year has also gotten off to a wet start. Whether or not wet conditions persist can be expected affect the volume of acres actually planted and whether or not the increase in U.S. production will be proportional to the increase in expected acreage.