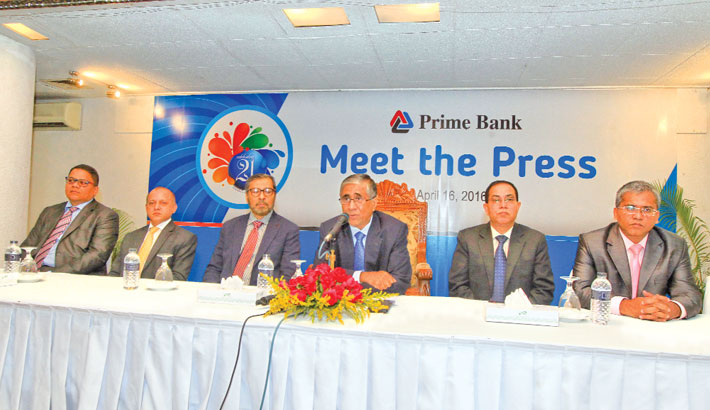 Ahmed Kamal Khan Chowdhury, Managing Director of Prime Bank Limited, speaks at a Meet the Press, at a hotel in the capital on Saturday.

Prime Bank has been playing unique role in boosting trade, commerce and expanding business stakes in a wide ranging of fields like shipping, textiles energy.
Besides, the bank is financing private entrepreneurs in various enterprises like SME, agriculture, women entrepreneurship and also conducting Islamic banking.
Ahmed Kamal Khan Chowdhury, Managing Director of the bank said this while speaking at a Meet the Press at a hotel in the capital on Saturday.
The programme was arranged as the bank stepped into 22 years since it started its business on this day in 1995.
Deputy Managing Directors of the bank Habibur Rahman, Rahel Ahmed, Md. Towhidur Alam Khan, Ahmed Shain and Sayed Faridur Rahman were also present on this occasion.
Ahmed Kamal Khan Chowdhury said, the bank has already made significant progress within a very short period of time. It started the journey as the second generation bank with Tk 10 crore paid-up capital, Today, the bank’s paid up capital stands at Tk 1029.34 crore.
He said, the bank’s deposit stands at Tk 19,484 crore as on the closing of the year 2015. Today, the bank has Tk 25,216 crore properties and its invest totals around Tk 15,186 crore, the programme was told.
The bank is conducting its business with 145 branches and 170 ATM booths across the country. Besides, Prime Bank has three overseas money exchanges in Singapore, Hong Kong and the United Kingdom, he added.
Managing Detector said the bank has already secured an enviable position among other banks for the achievements of business operation. It has been graded as a top ranking bank in the country through internationally accepted CAMELS rating.
He said, the bank is also a pioneer in the agriculture and retail banking among other private banks.
The bank has created two new divisions  - Commercial Banking, and Corporate and Investment Banking, to giving one-stop service to the customers, he added.
Replying to a quarry Ahmed Kamal Khan Chowdhury said, the bank has 7.86 percent bad loans, which is the consequence of political unrest during last two years.