Brazil without Neymar for Paraguay trip 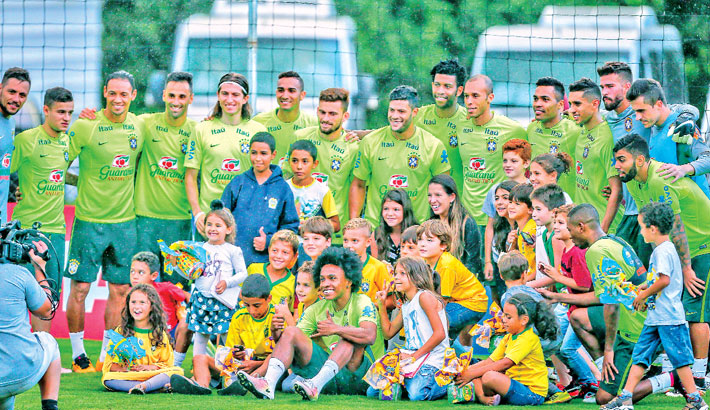 Brazil will be without Barcelona star Neymar and Paris Saint-Germain defender David Luiz on Tuesday when they face a tricky 2018 World Cup qualifying trip to Paraguay with renewed uncertainty swirling around their campaign.
The Brazilians are licking their wounds after the disappointment of Friday’s 2-2 draw with Uruguay, when they squandered a two-goal lead and finished the game clinging on for the point. For the opening half hour in Recife, Brazil were irresistible, attacking with precision and purpose in what looked like being their best performance since their 2014 World Cup semi-final debacle against Germany.
But Uruguay’s fightback, begun with Edinson Cavani’s superb volley and completed by Luis Suarez’s predatory strike after half-time, has reawakened all of the old concerns about Brazil’s brittle defence, humiliated in the 7-1 thrashing by the Germans two years ago.
The frustration of allowing Uruguay back into the game eventually got the better of Neymar, who was cautioned for a petulant kick on Alvaro Gonzalez, meaning he will now be suspended for Tuesday’s trip to Asuncion.
Former Chelsea centre-back Luiz also earned a booking on Friday that will see him miss the game against Paraguay, who are level on eight points with third placed Brazil after five matches.
Brazil coach Dunga has called up Santos’s exciting teenage striker Gabriel Barbosa, a star of the Olympic team, to replace Neymar while Corinthians defender Felipe will come in for Luiz.
Gabriel, 19, known widely as “Gabigol” and regarded as the heir apparent to Neymar, will be making his first senior appearance for Brazil after starring for the Under-23s last year where he scored six goals in four matches.
“I will be realizing a dream that I did not expect so soon,” Gabriel said. “I’m happy for the opportunity.”
Paraguay meanwhile will be looking for all three points against opponents whom they have caused repeated problems in recent years.
Elsewhere, Ecuador face a demanding trip to face Colombia in Barranquilla while Uruguay host Peru in Montevideo.
Chile will aim to bounce back from the disappointment their home defeat by Argentina last week when they travel to bottom side Venezuela, who have only one point from five matches.