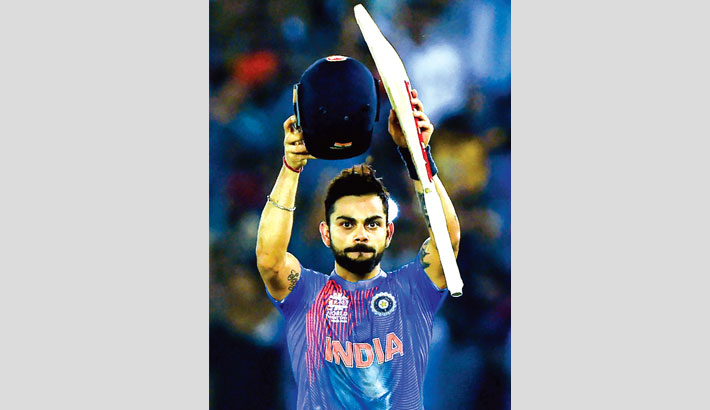 Australian commentators were full of praise for Virat Kohli’s thrilling batting on Monday, even though his heroic 82 sent Steve Smith’s team crashing out of the World T20.
India triumphed in the do-or-die showdown in Mohali as they successfully ran down Australia’s 160 for 6 to win with five balls to spare as Kohli put on a batting masterclass.
“Steve Smith called it the ‘Virat show’ and he was right,” wrote Chris Barratt in The Sydney Morning Herald, acknowledging the dejected skipper’s post-match remarks.
“With one of the greatest ever Twenty20 international innings India’s batting maestro all but single-handedly sent Australia home from the 20-overs world championship.”
“One man wins it,” agreed The Daily Telegraph’s Ben Horne as he described the match which crushed Australia’s hopes of a World T20 title and puts India through to the semi-finals.
“I think it’s safe to say there is no talent in world cricket at the moment quite like Virat Kohli,” Horne said in a podcast.
Writing in The Australian newspaper, Gideon Haigh said Kohli’s unbeaten 82 off 51 balls had “made an awkward chase look like simplicity itself”.
“Not a stroke, by the way, would have looked out of place in a Test match,” he wrote.
“Much as the marketers would like to take the cricket out of T20, Kohli keeps putting it back.”
While Geoff Lemon, writing for the Australian Broadcasting Corporation said it was hard to feel disappointed at being knocked out by such an impressive innings.
“It is hard to feel anything but awe,” he wrote.
Cricketing greats also heaped praise on Kohli, who with skipper Mahendra Singh Dhoni put on 67 runs to take the team to the finish line.
“Wow, that was absolute class from Virat. Congrats India on your win,” tweeted spin master Shane Warne.
Former Australia captain Michael Clarke added: “Looked like a class performance from @imVkohli#T20WorldCup”.